Through the afternoon and into the early evening of Saturday 8 May 2021 – when we were not in lockdown – music and song drifted from a balcony and garden on the upper Esplanade in St Kilda for the free enjoyment of the local community and passers-by.

Curated by local residents on their private properties, Musical Balconies showed how a community inspired event can bring value and fun back to St Kilda streets and provided an alternative model to the large corporate inspired gigs taking over. And, with the support Council's Local Festival Fund (now part of the Cultural Development Fund), pay musicians and tech crews.

Our grand vision is to inspire and create a series of intimate musical events on residential balconies and street facing gardens across various neighbourhoods.

Imagine, for a moment, the Esplanade alive with music as one after another balcony / garden ignites with sound, creating a moving, multi-genre performance feast back and forth from Fitzroy Street to Acland Street, its footpath abuzz with spontaneous dancing. Midway along, Alfred Square bursts with buskers.  Perhaps the streets behind could also host music, and thus the whole block comes alive.  And then other neighbourhoods.

So, when Port Phillip Council announced its Local Festival Fund Recovery Grant program, we saw the opportunity for a pilot event . . .  And here it is, happening on 8 May from midday!

Hosted by residents at 25 & 26 Esplanade (opposite Luna Park), the line-up features a mix of genres presented by local musicians and community bands/choirs, for the enjoyment of passing pedestrians. 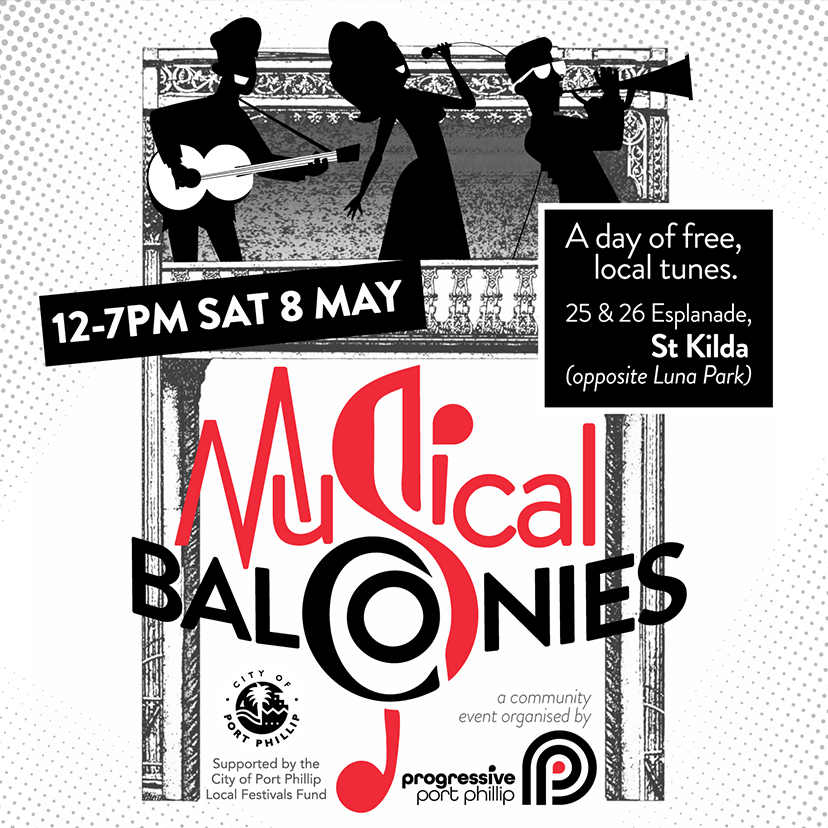 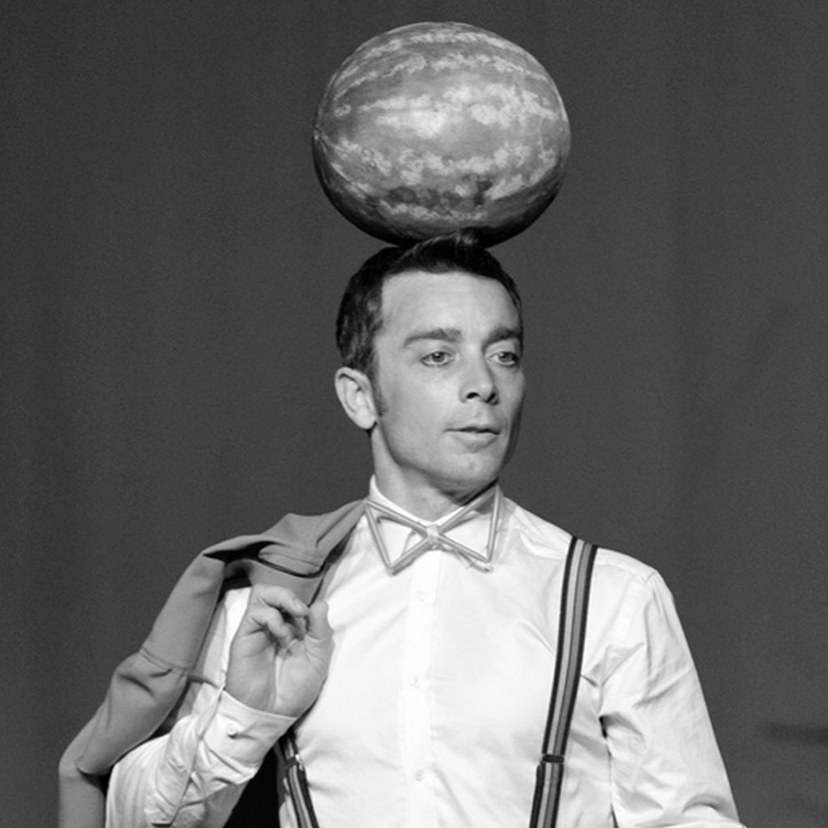 OUR MC FOR THE AFTERNOON – DANDYMAN

Welcome to the wonderful and ridiculously funny world of Dandyman. One of Australia’s finest and funniest physical comedians Dandyman (Daniel Oldaker) is a five-star award-winning physical comedian who draws on 23 years of performance experience in over 30 countries. Currently based in St Kilda, Dandyman has trained with Phillippe Gaulier (Sascha Baron Cohens mentor), been sought after by Cirque du Soleil and other major touring companies and performed at many of the most highly regarded festivals and venues around the globe. 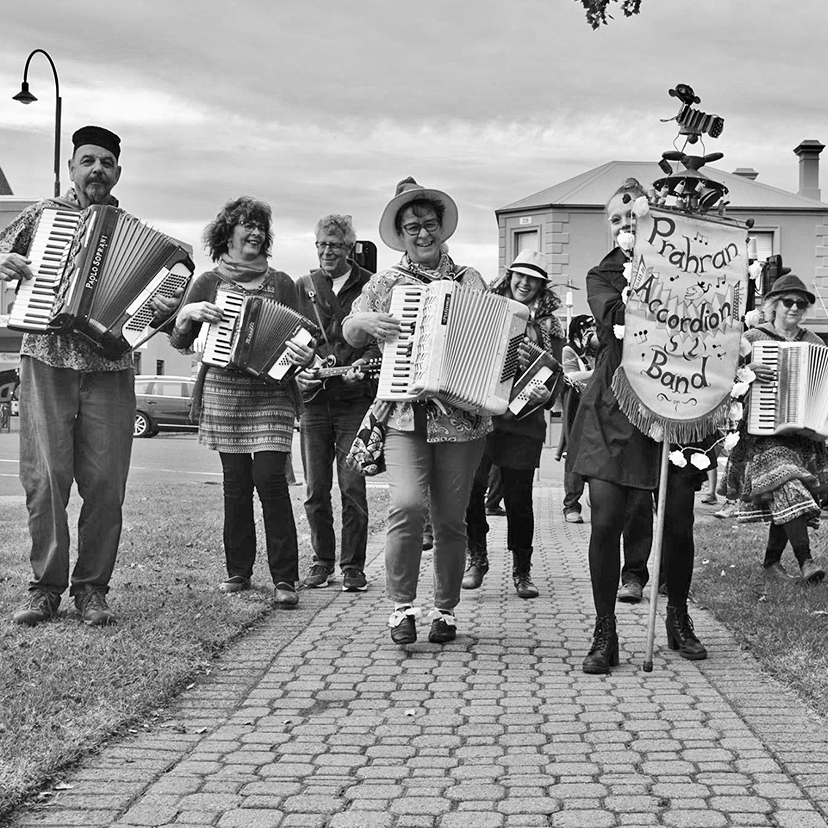 The Prahran Accordion Band is a community orchestra open to all levels of experience from beginners to advanced.  The band meets on Thursday evenings at the German Tivoli Club on Dandenong Road.

The concert they are going to play for Musical Balconies is called “We do like to be beside the seaside!”  It's a collection of tunes from all around the world with a theme of the sea, from Brighton pavilion to the seedy bars of Jamaica. 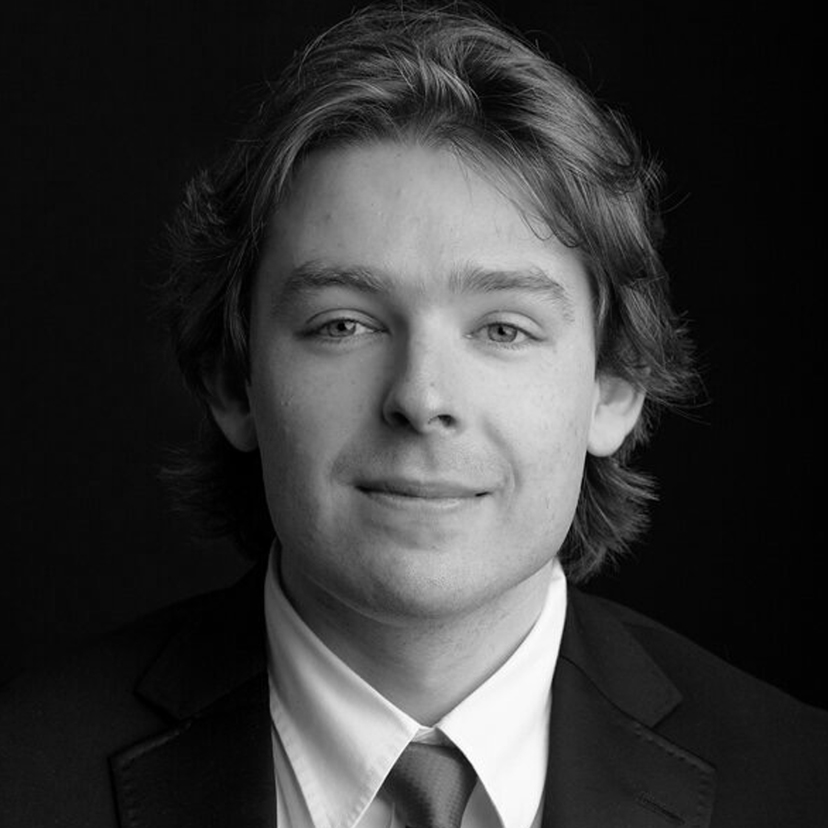 Aidan McGartland is an aspiring opera singer (baritone) and musicologist, currently in his Honours year at the Melbourne Conservatorium of Music. He has performed with a wide range of choirs and opera choruses, as well as solo recitals, in the vibrant Melbourne music scene. In 2018, Aidan co-founded a new music student-run choir at the Conservatorium, called Candlelight VOX. In 2019, he received a scholarship to study at McGill University in Montréal for six months and later this year he will be commencing postgraduate studies at the University of Oxford. 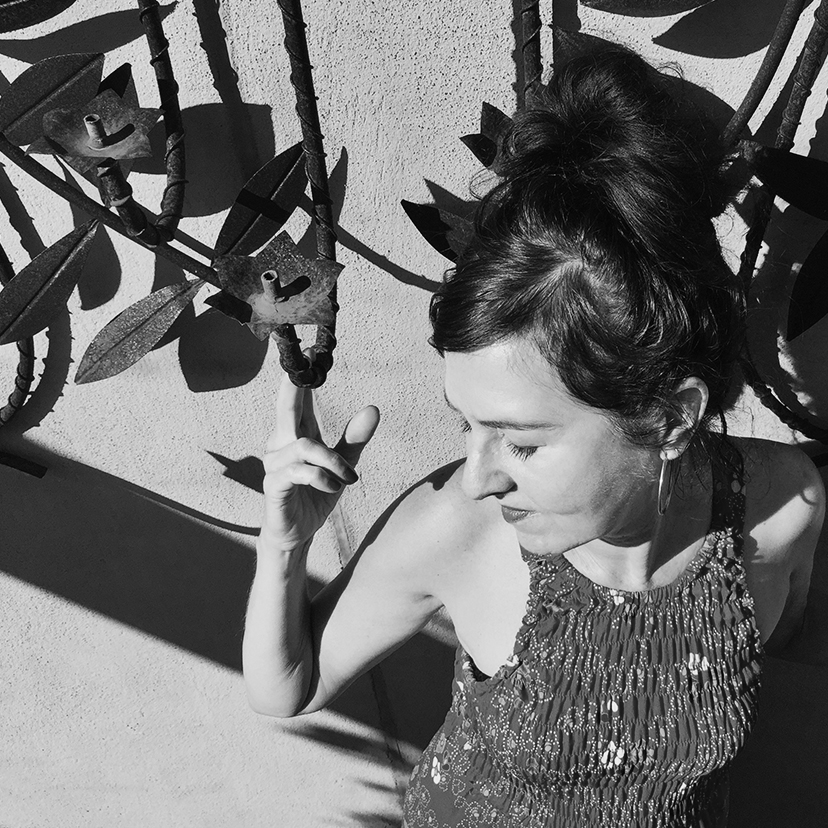 Melbourne songstress, Tanya-Lee Davies, is a heart-seeking missile, who specialises in dreamy / pop country / folk sounds: big on melody, lush vocals and lyrics that cast spells. Her psychic home is in the sounds of Laurel Canyon, Nashville and early 70’s New York.

Tanya-Lee and her band perform on Musical Balconies hot on the heels of her latest single release. Fuelled with yearning and longing KISS SOMEONE was written during a long cold lockdown in Melbourne.

Previewing songs from her latest album on 8 May, she’ll be joined by Kathleen Halloran on guitar, Jo To on bass and Maryanne Dihahyco on backing vocals. 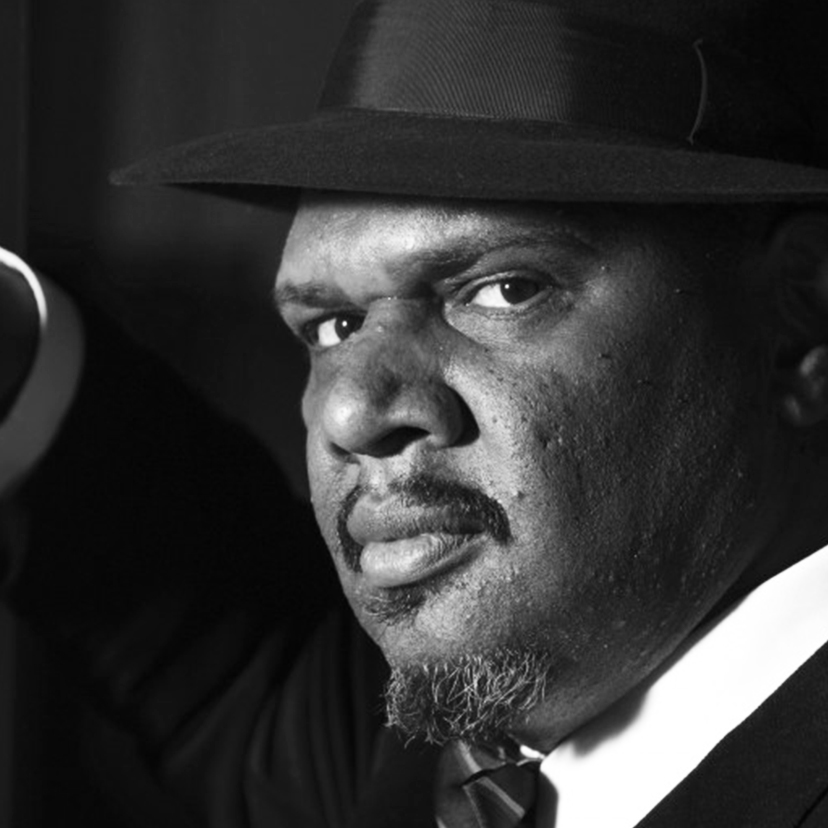 John Wayne Parsons is a proud Yuggerabul Meriam Le man based in Melbourne, whose singing practice is deeply embedded within his cultural identity and ancestral ties to cultural warriors and knowledge holders from both sides of his Aboriginal and Torres Strait Islander heritage.

He has worked in the music industry for over 20 years as a composer, producer and performer, appearing in Uncle Archie Roach's film clip Into The Blood Stream, performing with Deborah Cheetham in Australia's Opera Pecan Summer and performing Mission Songs with Jesse Lloyd, and singing at festivals including Yaluk-ut Weelam Ngargee and Womin Djeka Balnarring Ngargee. 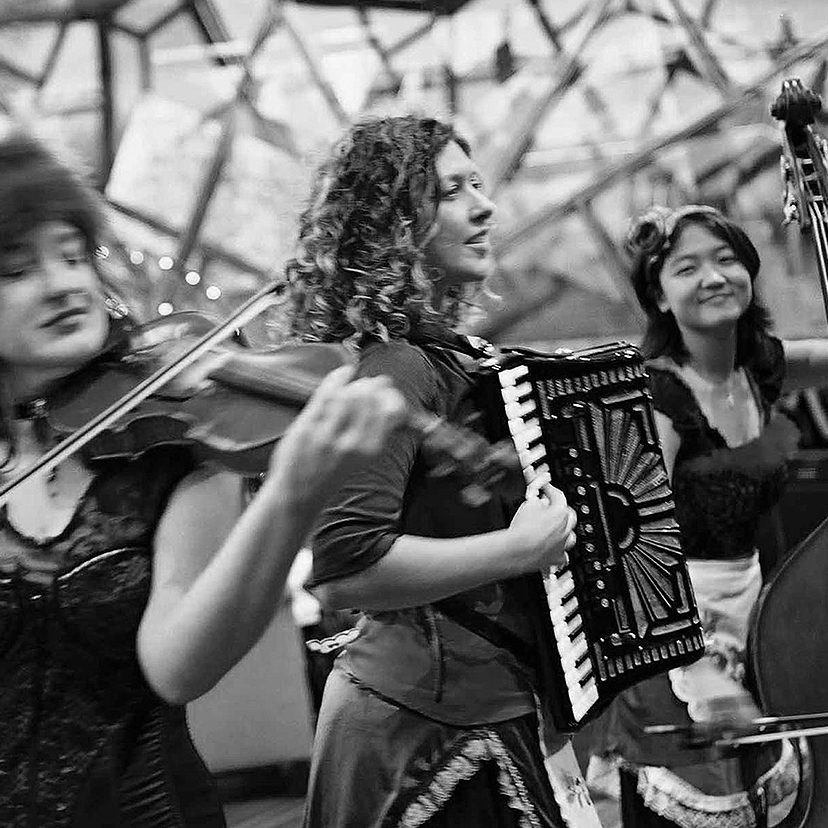 "Is there enough passion in your life?”   How long has it been since you spent an afternoon with three glamorous gypsy girls whose only desire is to whip you into a frenzy with their instrumental virtuosity and then cause you to swoon with the beauty of their vocal harmonies?

The Stiletto Sisters have been wooing audiences in their home town of Melbourne, for many years with their seductive blend of Hungarian gypsy, tango and love songs from around the world. 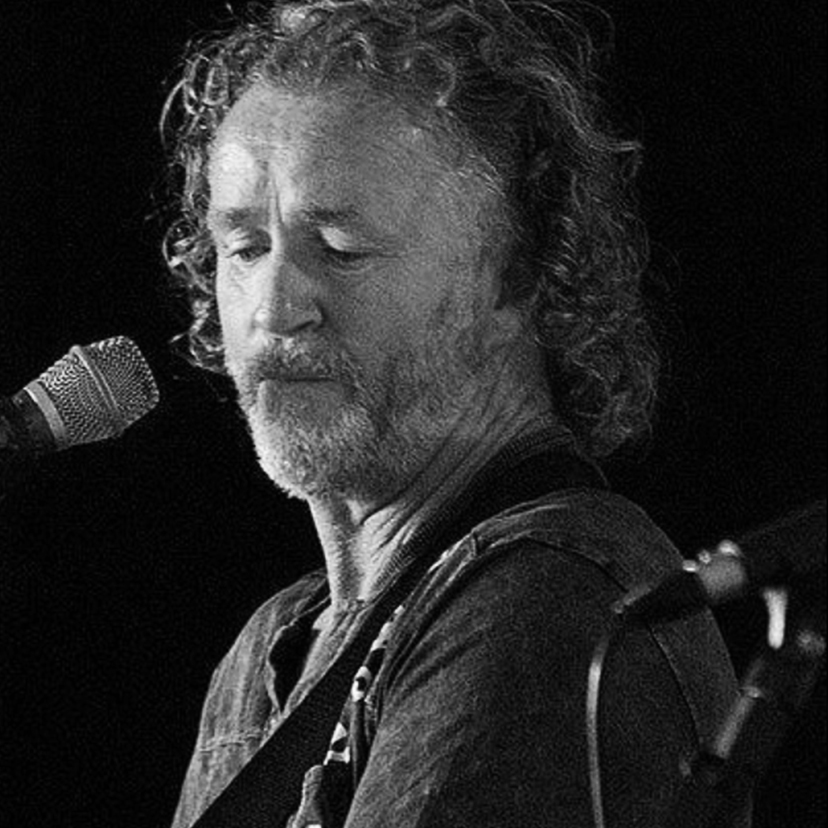 Paul Brown is a successful and dynamic vocalist/guitarist live performer in venues throughout Melbourne and Victoria for more than 30 years. 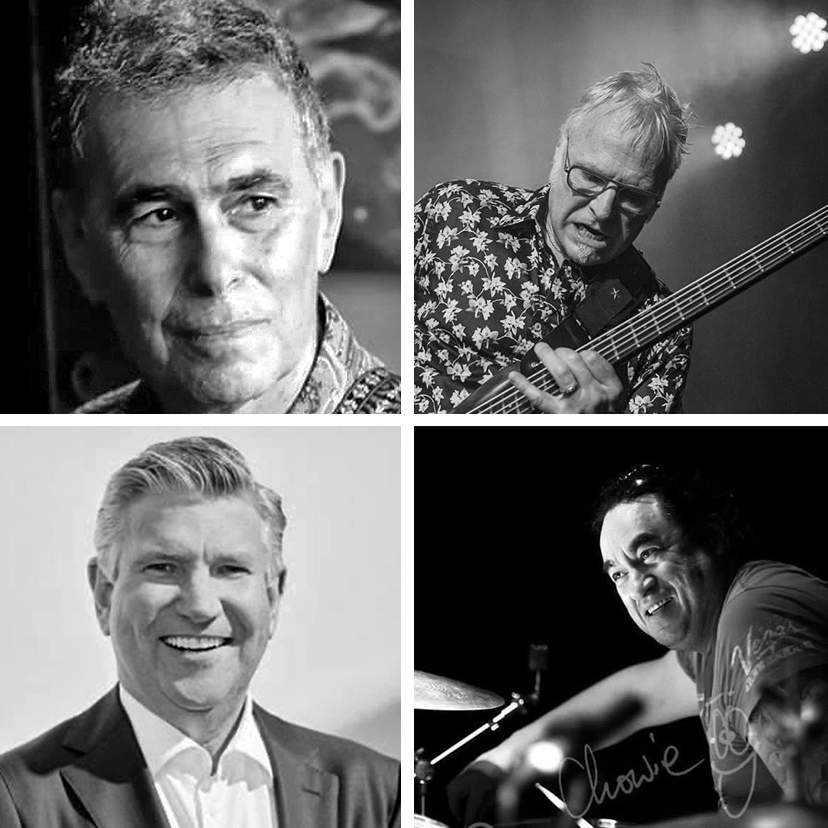 The BORNSTEIN ULTIMATUM band plays all the classics of the 60s and 70s – and is made up of the cream of Melbourne musicians.  The line-up for Musical Balconies, includes David Bornstein the instigator of the band, Marshall Rushford on Sax, Rob Furst on keys, Roger McLachlan (ex Little River Band) on bass and Davey Porter on drums. 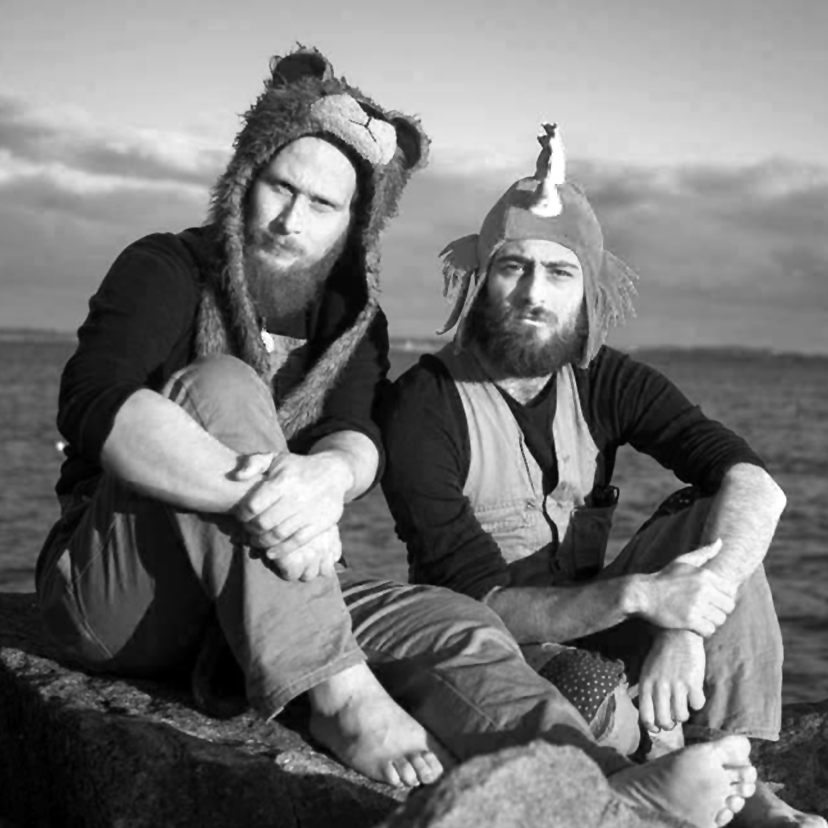 On the nebulous intersection of trad jazz, sea shanty and ole' fashioned folk sit The Grubby Urchins, a duo of happy-go-lucky young Melburnians with dirty feet and a penchant for the eclectically bizarre. Armed with heady harmonies and intrepid instrumentals, the Urchins wage stylistic war on songs old and new. 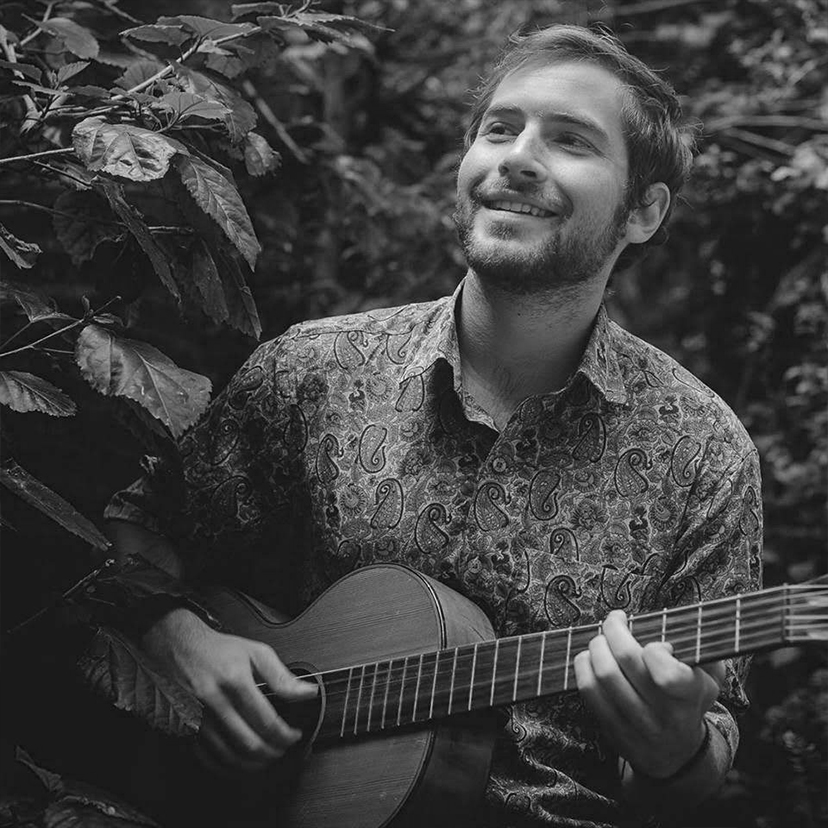 Marc Bornstein is a versatile accomplished singer, songwriter who honed his skills gigging his way around the world for the last 7 years earning a living playing solo as well as joining lots of other eclectic performers in Europe and South America. He exudes emotion, character and colour in his music with skill and finesse! 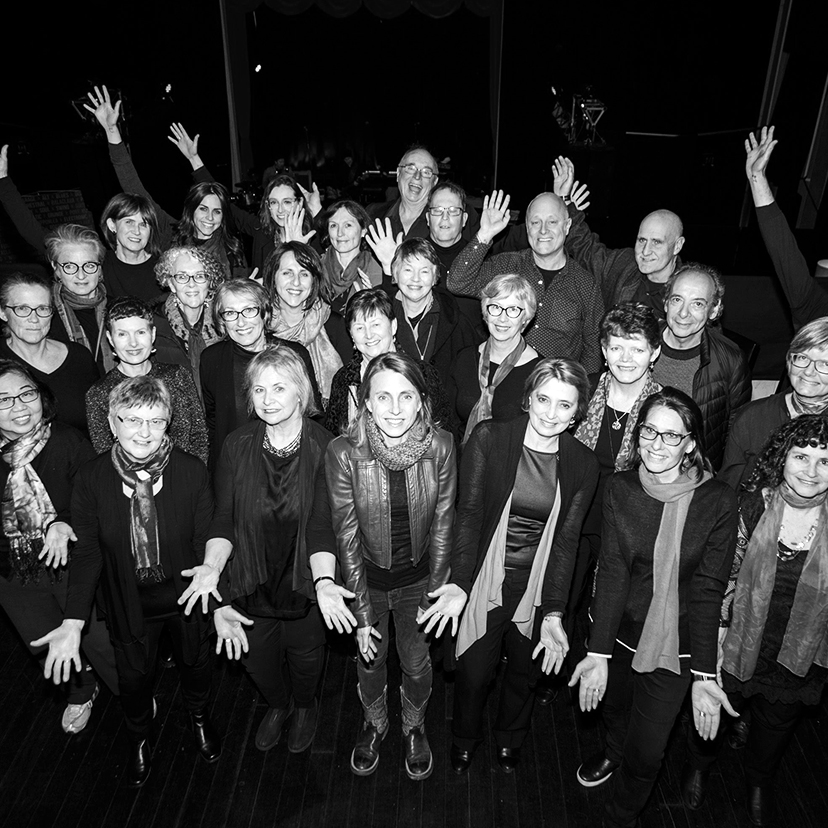 Elwood Community Choir was formed in 2016 by Ripponlea singer and choir leader Jeannie Marsh. The choir sings music ranging from current pop, to World music, retro pop, and music-theatre, and has a particular commitment to music by Australian artists, and collaborates frequently with Elwood’s singer-songwriter Tracy Harvey.

It has performed at many community events, including St Kilda Festival, community markets, and Christmas concerts and recently launched the Elwood Singing Walking Trail (supported by City of Port Phillip), an outdoor singing project celebrating the heritage and special places of Elwood. (photo by Joshua Braybrook) 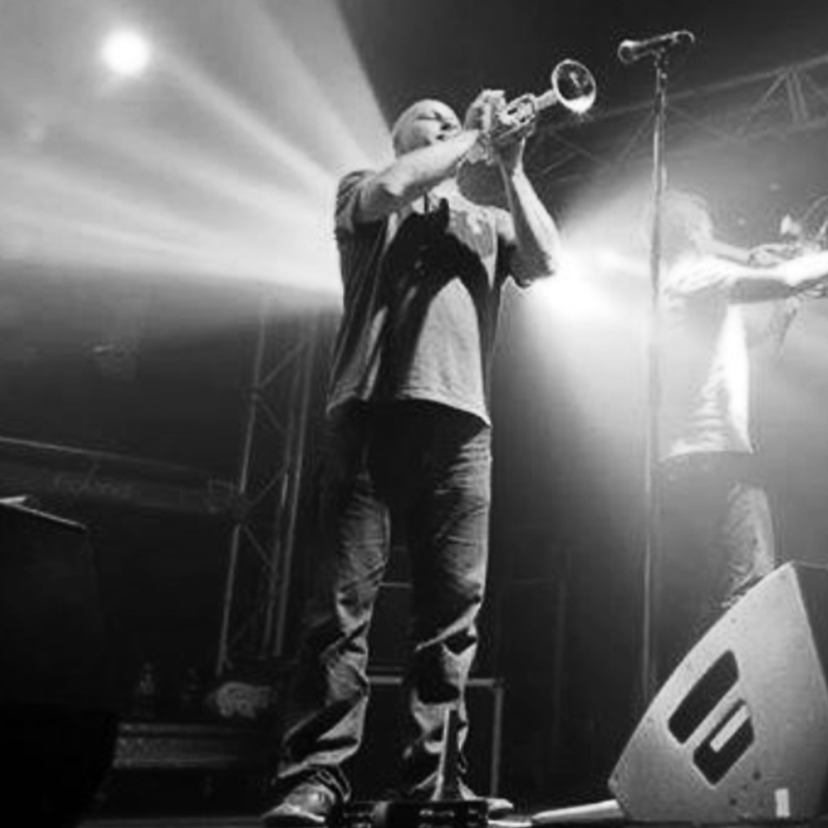 Jack Howard, one of the great quiet achievers of Australian music, is an accomplished musician and member of the famous band Hunters and Collectors in Australia. In 2001, he toured the world with Midnight Oil as their multi-instrumentalist. He has also been releasing his own critically acclaimed records since 2001.

Though probably best known for his role as Hunters & Collectors’ trumpet man, he has done so much more over the years, including his solo career to his work with acts like Rodriguez, The Living End and Midnight Oil, and had a residency at the Dog’s Bar. 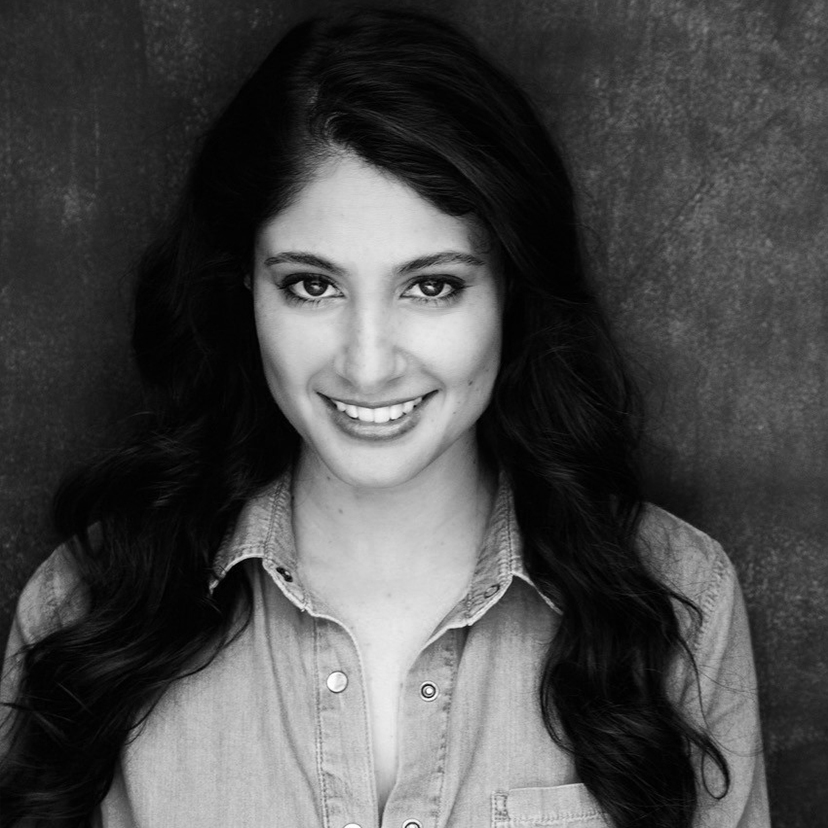 Nicky Kurta is an Australian-born voice artist, actress, cabaret performer and singer/songwriter. She has been a backing vocalist for artists such as INXS, Olivia Newton-John and X Factor winner Dami Im. As a singer/songwriter Nicky has collaborated with some of Australia's most accomplished artists including DNA, Rick Price, Michael Carr and Brian Cadd. Nicky's own single MAYBE LIFE IS reached number 8 on the Australian iTunes singer/songwriter chart, and her recent cabaret show, The Marvelous Miss Kurta, played to sold out venues.

At Musical Balconies, she will sing with Sam Lemann, on guitar.  instagram.com/samlemann 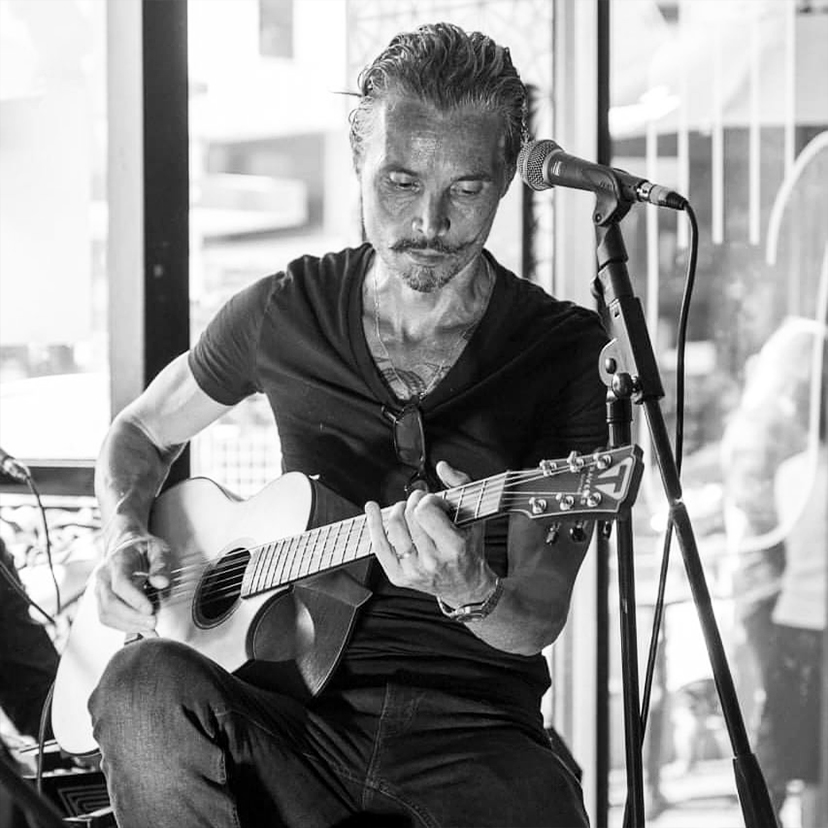 “As a performer and songwriter today, I am always reaching back in order to look forward. Reaching back to what? Well, the blues, I guess? Those songs from turbulent times that still resonate with people today. Whether jazz, blues, country or folk - I care little for the distinction - as it has always been a case of nuance for me. Evermore I continue to draw upon the seminal experience of hearing real live jazz and blues played in our childhood home, which has fuelled my hunger to explore, create and develop...”

Big thanks to David Bornstein, Krystyna Kynst, Rhonda Small and Bill Garner, for developing the concept and turning it into reality through hours of planning, programming, budgeting, grant writing, publicity, and constant worry about the small detail. They provided their time and expertise for free, so that the grant money could be used to pay musicians and crew. Simon Kosmer from River to my People created the brand and design. All are long term St Kilda residents, passionate about the arts, especially live music, and about reviving local community events.

The St Kilda Festival Talking Shop looked at alternative festival models to the St Kilda Festival Sunday.  Participants expressed interest in a series of smaller, community-initiated events spread out across Port Phillip throughout the year. Smaller festivals with varied programs would reflect our very different neighbourhoods. In other places in Australia and around the world such festivals attract visitors precisely for their local flavour. The St Kilda Festival has little local flavour, just a fabulous location. Several spoke in favour of a much greater mix of music, including classical, and the substantial inclusion of other arts.

The important aspect of the Musical Balconies Project is that the live music is hosted on private residential spaces (not at music venues, pubs, bars or big stages in parks).

The focus is local.  It’s about engaging with the local community first, the visitor second.  It’s about involving residents in a cultural activity and in supporting the arts – either as a performer, balcony host, event organiser or audience member, thus building community across our neighbourhoods.  As each Musical Balconies event is curated by individual hosts, it is organic and surprising, open to all genres of live music. The only caveat is that each host needs to be mindful of the impact on neighbours and negotiate with them as to what is acceptable.

Our objective is to complement local street activity rather than dominate it. We hope to demonstrate that a series of intimate rotating performances can attract diverse audiences without the negative impact on residential amenity of large-scale festivals.  And show that live music can be enjoyed anywhere and that it’s okay to spontaneously dance in the street.

The event has been developed in consultation with, and encouraged by, the City of Port Phillip's Local Festival Fund.

Enjoy our pilot event on 8 May and let us know what you think.

Send us an email on [email protected]